This article was originally produced for Dairy’s Bottom Line, a PDPW publication.

Discovery Farms and the Department of Agriculture Trade and Consumer Protection (DATCP) partnered up in March to begin a Producer-Led Webinar Series called, “Planting New Ideas, Growing Conservation,” to feature farmers and their conservation practices. Last year, a webinar took place on October 13 and featured Kelby Lechleitner, a beef and ginseng farmer in Marathon County. Kelby shared no-tilling, interseeding and grazing cover crops experiences with over 65 live viewers. The Lechleitner’s transitioned from dairy to a cow-calf beef herd in 2014 and have learned a lot by trying out new things including transitioning their acreage to no-till and grazing cover crops to gain more feed for their beef cows from fall into winter. Their idea to make these changes sparked from a meeting held by Matt Oehmichen of Short Lane Ag Supply, who also participated in the webinar.

In the first year of trying to graze cover crops, Kelby tried to interseed into his 30 inch cornrows in early June when it was around the V3-V4 stage. The next year, he decided to try using 60-inch cornrows to increase light to the cover crops in hopes of getting better stands and tonnage for grazing. In 2020, his strategy with 60-inch rows worked well and his animals had plenty of cover crops and leftover corn stalks to graze on this fall. 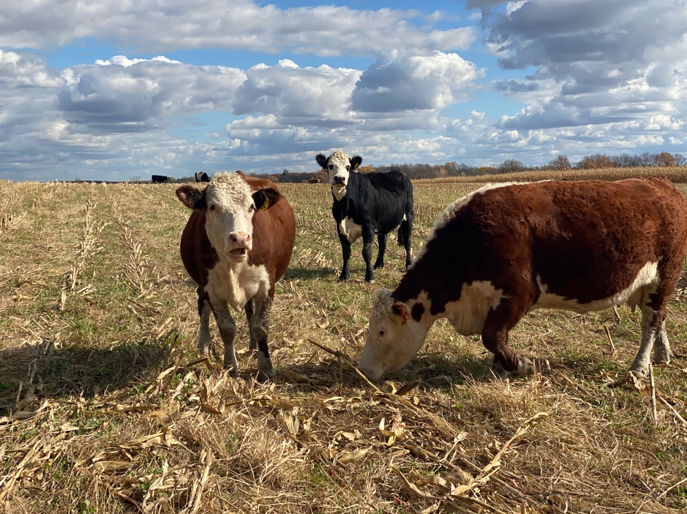 The weather this year was very accommodating to this practice and Kelby’s animals grazed well into October on this corn field.

Matt Oehmichen, Short Lane Ag Supply, discussed typical seeding rates of interseeded cover crops. Usually, rates will range from 16-18 lbs/acre, but since Kelby had plans of grazing, he increased the rate to 38 lbs/acre. He planted a mix with eight different species including annual rye, cereal rye, oats, crimson clover (which Matt refers to as the iron horse in interseeding mixes because of its ability to survive and flourish), cowpeas, sunflowers and two types of rapeseed.

“Cover crops do not have to break the bank,” Matt explained. This eight-way interseeding mix came out to be only $26/acre, even at the heavier planting rate. Kelby sees the health benefits of grazing his beef cattle because of the extra exercise they are getting from harvesting their own quality forage from the pasture. He plans on bale grazing this winter to reap those same exercise and movement benefits.

Transitioning to no-till and planting cover crops has eliminated tillage passes and reduced inputs on the Lechleitner farm. This year, the only fertilizer used on the interseeded cornfield was corn starter applied at planting and manure nutrients left in the field from the cattle grazing last fall. Matt says he often gets the question as a retailer as to why he’s promoting these practices if it’s not generating sales of inputs for Short Lane Ag Supply. Matt explains, “From an ag retail point of view if a farmer is running out of money and can’t purchase our inputs, it will run us out of business. I’d rather see farmers being successful and able to do business with us than go bankrupt.

Kelby and Matt are both members of the Eau Pleine Partnership for Integrated Conservation, a community-led watershed, which includes many farmers and farm groups, but it also has a diverse membership of engaged citizens from lake groups, wildlife groups, non-profits, government agencies, private agronomists, and more in Marathon County. The goals of the group are to enhance agriculture and farming in the region through conservation and profitability. They want to keep their communities healthy, not only by protecting water quality but by ensuring farmers are producing quality products and sustaining a good life on their farms. The number of dairy farms has significantly decreased in the area which has resulted in reduced forage production and increased row cropping. This has led to an increase in soil erosion. By implementing creative and regenerative practices into row cropping systems, these erosion concerns will improve.