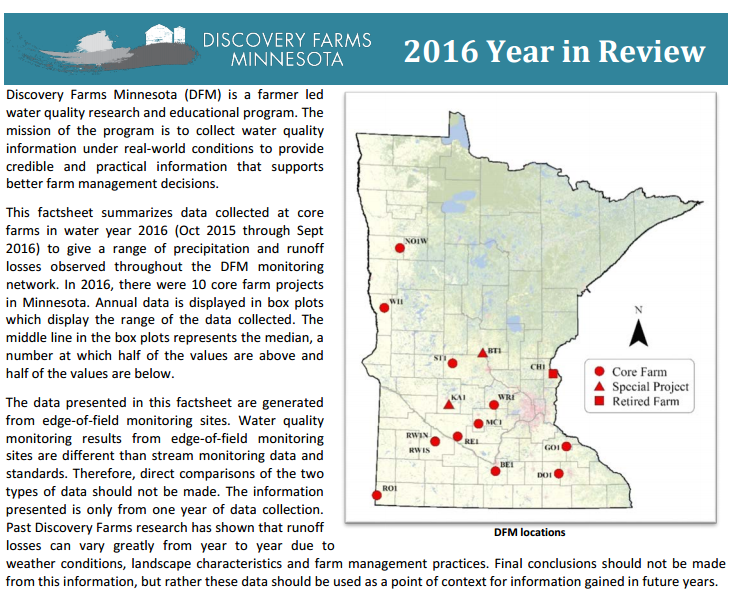 The Discovery Farms Minnesota 2016 Year in Review provides a summary of the data generated from 10 core farms with edge-of-field surface runoff and tile flow monitoring. The report is a general overview of the amount of precipitation, surface runoff, tile flow, and soil, phosphorus, and nitrogen loss measured throughout the Discovery Farms Minnesota monitoring network in 2016.

Overall, 2016 was a very wet year across Minnesota with the sites ranging from 0.69 to 15.88 inches of precipitation above normal. This was the first year that all the locations in the Discovery Farms program had above normal precipitation. The increase in precipitation was especially evident in July, August, and September.

In 2016, soil losses were similar to past years even with above normal surface runoff. Most the soil loss in was observed in September, which is unusual for agricultural fields in Minnesota. Typically, April through June are the most active for soil loss with on average 80% of the soil loss occurring during those months.

Phosphorus and Nitrogen results from 2016 were similar to past years of DFM research, with total losses slightly above normal. Phosphorus was mainly transported with surface runoff as there was very low levels of phosphorus found in the tile flow. Most of the phosphorus loss occurred in the months of February and September. Nitrogen was mainly transported by tile flow with nitrate nitrogen being the main form of nitrogen movement in tile flow. The timing of tile flow paralleled the timing of nitrogen loss, with May, June, August, and September being the most active.

For more details, the 2016 year-in-review report can be found on the resources page of www.discoveryfarmsmn.org or it can be downloaded directly here.