The Maximum Return To Nitrogen (MRTN) is the nitrogen (N) rate that optimizes net profit. Applying rates near the MRTN can reduce risk of nitrate-nitrogen leaching to groundwater and surface water and is a recommended Best Management Practice (BMP) when fertilizing corn in Minnesota. MRTN rates are derived from over 160 Univeristy N rate response trials conducted over a variety of years and locations across the state. Most N rate response trials in the MRTN database have been conducted in southern Minnesota. Less than 20% of these studies have been conducted in southeast counties, and most are older than ten years. Farmers have observed historic increases in yield potential in the past several years with proven field averages over 240 bu/ac. Legitimate questions often arise whether BMP recommended rates, which are based on MRTN reponse trials, are adequate for today’s high yielding corn hybrids, farming systems and soil types in southeast Minnesota.

For these reasons, farmers and their advisors have requested additional studies to help improve confidence in nitrogen rate BMP recommendations. Furthermore, split applying nitrogen has gained popularity in recent years, but there are questions about how much in-season N to apply and how often split applications outperform preplant applications. In collaboration with Jeff Vetsch of the University of Minnesota and funding from MN Dept. of Agriculture’s Clean Water Fund program, eight research-grade field studies were conducted over a three-year period to evaluate the relationship between corn yield, nitrogen rate and timing in southeast Minnesota. 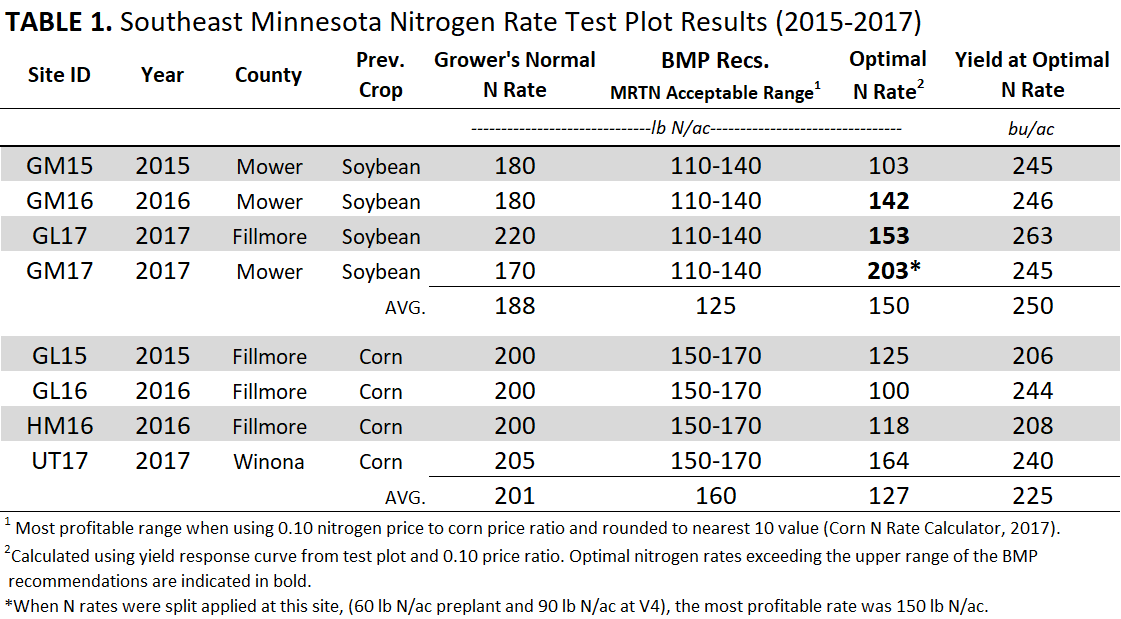 Results from this study found the optimal N rate ranged from 103 to 203 lb N/ac for C/S and 100 to 164 lb N/ac for C/C. When comparing test plot optimal N results to the upper range of the BMP rate recommendations, 5 out of 8 sites (63%) maximized yield and economics. Surprisingly, the highest N rate requirements were all corn following soybean sites. At sites GM16 and GL17, the optimal N rate was greater than the recommended BMP rate by 2 lb N/ac and 13 lb N/ac respectively. It’s predicted that BMP rates would have resulted in a marginal yield reduction of just 0.2 bu/ac and 2.0 bu/ac. The largest difference between the test plot rate and BMP rate, 63 lb N/ac, occurred at site GM17. The increased yield response to N at this site was likely attributed to leaching of fall-applied N credits and denitrification loss from compaction. It should be noted that when nitrogen was split applied at this site, the economically optimal nitrogen rate was 150 lb N/ac. With the exception of the 2017 Mower county site, all sites had optimal N rates below the maximum BMP rate. Overall, results from these high yielding corn plots showed that in most cases, BMP N rates were the most profitable. Additional on-farm studies are planned and on-going. These will enhance the MRTN database in the southeast corner of the state. To learn more about on-farm nutrient trials visit http://www.mda.state.mn.us/protecting/cleanwaterfund/onfarmprojects/nmi.